A PROTOCOL PRIMER: THE QUEEN & PRESIDENT TRUMP's UK STATE VISIT - 2019 All You Need To Know 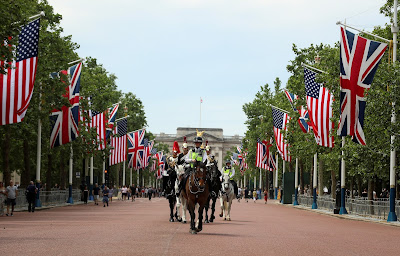 a) Presidential Protocol Gaffes:
* To Bow or Not to Bow?
* Toasts
b) Why won't President Trump:
* stay at Buckingham Palace?
* address Parliament?
* receive the Household Cavalry's Sovereign's Escort?

THE QUEEN & 12 US PRESIDENTS

Including President Trump, HM The Queen has met 12 of the last 13 American presidents, beginning with President Harry Truman, whom the then Princess Elizabeth met in 1951.
The missing president? Lyndon Johnson – a shame perhaps given their shared love of dogs. That being said, The Queen might not have approved of the late president's habit of lifting his beagles’ by their ears.


The first president The Queen met in her capacity as Sovereign was President Eisenhower in 1957. During this visit to North America, The Queen wore two metaphorical crowns, acting separately as Queen of the United Kingdom and Queen of Canada.


As Queen of Canada, and in advance of opening Canada's St. Lawrence Seaway, Queen Elizabeth II hosted a reception for President Eisenhower in the Canadian embassy in Washington D.C. stating: “I’m going home to Canada tomorrow”.


Whilst many US presidents have visited the UK, only two received a state visit prior to President Trump, and these were his immediate predecessors: President Obama in 2011 and President George W. Bush in 2003.


STATE VISITS TO THE UK


Starting with TM King Gustav VI Adolf and Queen Louise of Sweden in 1954, The Queen has hosted 113 state visits during her 67 year reign.  Due to the amount of work involved, No. 10 & the Palace try to restrict the number of visits to two per year.

The “royal” portion of a state visit can incorporate either London (as on this occasion) or Windsor Castle (as with President Lech Walesa of Poland's state visit in 1991).Whilst not quite a state visit, the official visit of HH Pope Benedict XVI was similar to a state visit and was held at the Palace of Holyroodhouse in Edinburgh, with the little known Royal Company of Archers replacing the more familiar red-coated guards seen in London and Windsor.

To Bow or Not To Bow?

No one should expect the President of the United States to bow to HM The Queen. Nor should the First Lady be expected to curtsey (unless she wishes -- Nancy Reagan chose to do this but was under no obligation). 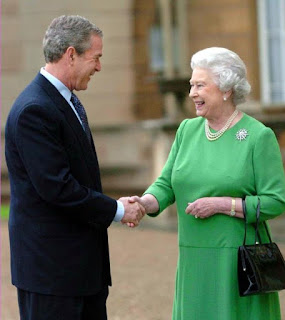 In bizarre breaches of protocol President Obama performed deep bows before the previous Emperor of Japan and the King of Saudi Arabia.


No one appears certain why President Obama chose to do this -- particularly given he never showed similar deference to either Queen Elizabeth II or the late King Rama IX of Thailand, at the time respectively the world’s second longest and longest-reigning monarchs.

Given their excellent advisors, it's unlikely one president will repeat the gaffe of his predecessor -- and so I very much doubt President Trump will replicate one of the most embarrassing of all state visit gaffes.

In a very awkward moment during the state banquet at Buckingham Palace played live on television, President Obama forgot that the final words of the official toast must always be "The Queen" and nothing else.

One never speaks after those two words as they are the cue for the band to play the British national anthem. Alas, after a brief pause, he continued speaking -- the anthem seemingly becoming background music for his oration.

Alas, the cringe did not end there -- for the President's choice of quotation fell foul of another area of diplomatic etiquette as it made explicit reference to England...alone.

Not something likely to impress the residents of the 3 other parts of the United Kingdom: Scotland, Wales & Northern Ireland.
ARRIVAL 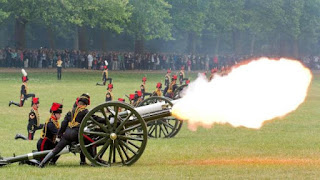 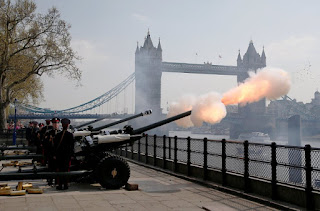 US Presidents travel and transport arrangements are always controlled in house whatever the occasion (save when an elderly Duke of Edinburgh offers to drive -- as he did not that long ago durin a previous presidential visit. Perhaps not this time).

Consequently, having touched down at Stansted Airport on Air Force One, the President will continue to Buckingham Palace aboard  the presidential chopper, Marine One.

Landing on the palace's West Lawn ,the pomp and pageantry shall commence with the official greeting, playing of the National Anthem and inspection of the guard of honour.

This is also the point at which a double whammy of gun salutes shall be fired:

*Salutes are not performed on Sundays.Each gun salute is performed at both Green Park (King's Troop Royal Horse Artillery) & The Tower of London (Honourable Artillery Company). A grand total of 4 gun salutes.


Visitors usually stay at either Buckingham Palace or Windsor Castle, but due to long-planned renovations at Buckingham Palace, the President and his family will be staying at Winfield House, the Official Residence of the US Ambassador.

Logistically, the American ambassador's residence in Regent's Park works well as it is a secure compound boasting London's second-largest garden after that of Buckingham Palace itself. This setting shall enable the presidential helicopter (Marine One) to land and take off with almost as much ease as at Buckingham Palace.
For the curious: the garden at Buckingham Palace is 39 acres (15.8 ha) and at Winfield House 12.5 acres (4.9 ha). London's third largest garden belongs to the Archbishop of Canterbury at Lambeth Palace. Its 3.65 hectares (9 acres) are all that remain of the much larger medieval garden of 8 hectares.

Following the partisan grand-standing of John Bercow, Speaker of the House of Commons, it appears that President Trump shall not address Parliament during his state visit.

I should mention that there is no need to secure the permission of the Speaker for a dignitary to address Parliament.

The Speaker can block access to Westminster Hall -- site of the address by President Obama -- but there is no obligation to hold such an event there.

The Speaker of the House of Lords can hold the event in Parliament's Royal Gallery instead -- indeed, this served as the venue for speeches by Presidents Reagan and Clinton.

If anything, inviting President Obama to speak in Westminster Hall was an anomaly. That is a singular honour traditionally reserved for far more significant events than one of the 2 annual state visits. The Royal Gallery is the more appropriate venue for normal state visits. 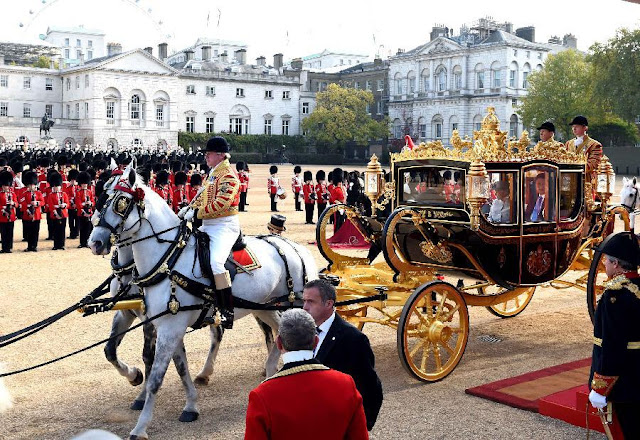 Consequently the traditional inspection of the guard will take place in the garden of Buckingham Palace rather than on Horse Guards Parade (the site of Trooping the Colour later this month -- the Queen’s official birthday celebration ).

Following lunch with The Queen at Buckingham Palace and a meeting with the Prince of Wales in his official residence, Clarence Hosue, The President and Mrs. Trump shall visit Westminster Abbey.

Here the traditional state visit protocol returns, as President Trump will lay a wreath on the Tomb of the Unknown Warrior -- the first in the world, being a British concept.


I am sure President Trump will have a chance to see the nearby Congressional Medal of Honor, the United States' highest award for valour, which was bestowed on the Unknown Warrior and was presented by US General John Pershing on 17 October 1921.

On 11 November 1921, the American Unknown Soldier was reciprocally awarded the Victoria Cross.

President and Mrs. Trump might also have an opportunity to see the Flag of the United States in the Battle of Britain Memorial Window (along with the flags of other allied nations) and note the name of the American pilot recorded with the British, Commonwealth, Polish and other allied pilots in the Roll of Honour.

In 2009 I was pleased to have been invited to the unveiling of the west window of Henry VII's Lady Chapel (the most beautiful room in Britain in my opinion). The Memorial Window honours a notable American philanthropist, Sir John Templeton, founder of The Templeton Prize for Progress in Religigion (the world's most valuable prize -- in monetary terms). Sir John was born in Tennessee and educated at Yale. Perhaps the President & First Lady shall see this, too.


The“jewel in the crown” of President Trump's state visit will be tonight’s state banquet at Buckingham Palace, a lavish affair for which the dress code is evening dress / white tie & decorations (& tiaras). This can be rather intimidating, but The Queen and the Royal Family are masters at putting people at ease.
Decorations:
Normally The Queen would be expected to wear the highest decoration she has received from the visiting head of state's  nation. HM wore the grand cross of the Order of the White Eagle when the President of Poland visited, for example.

Presidents Eisenhower, Reagan and Bush Jr. all received honorary knighthoods as Knights Grand Cross of the Most Honourable Order of the Bath. Were President Bush in attendance as a guest he would have been able to wear his broad sash and insignia of the Bath.
Posted by heydel-mankoo.com at 13:01