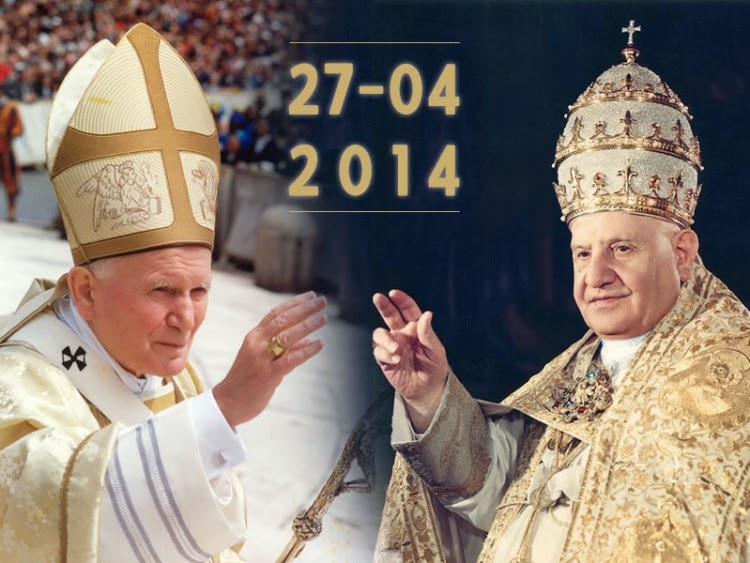 TM The King & Queen of Spain, TRH The Grand Duke & Grand Duchess of Luxembourg, TM King Albert and Queen Paola of Belgium and HMEmH The Prince and Grand Master of the Sovereign Military Order of Malta were amongst the faithful gathered in St. Peter's Square for the canonsiation of Saint John Paul II and Saint John XXIII by HH The Pope. HRH The Duke of Gloucester represented HM The Queen.

Estimates vary, but some commentators believe up to 1 million people may have attended the divine liturgy and accompanying ceremony. Much of St. Peter's Square was awash with Polish flags, at times resembling the sails from a flotilla, as Poles paid tribute to their great national hero, Saint John Paul II.

As seen above, Queen Sofia exercised the "Privilegio del Bianco" (a.k.a. "Privilege du Blanc"), the privilege accorded to certain Catholic queens, princesses and duchesses to dress in white, with a white mantilla, for papal audiences and other special occasions. Queen Paola and The Grand Duchess of Luxembourg were similarly attired. The head of the Prefecture of the Pontifical Household is likely to have decreed that this privilege would apply for this special occasion.

The privilege is not automatically granted to all Catholic queens or consorts. Historically it has been held by the Empress of Austria and Queen of Hungary, the Queens of France, Spain, Bavaria, Naples, Italy and Belgium, the Grand Duchess of Luxembourg and princesses of the House of Savoy.

Most recently it was extended to Princess Charlene of Monaco -- she wore white during a papal audience with Pope Benedict in 2013. The privilege has not been extended to Liechtenstein.

It is worth noting that Queen Maxima of the Netherlands (who is a Catholic despite marrying into the protestant royal family) also does not have the Privilegio del Bianco -- but as she was born in Argentina perhaps Pope Francis may choose to make this another reform!
Posted by heydel-mankoo.com at 10:03 No comments:

BBC TV Interview -- Royal Tour of New Zealand: The Duke & Duchess of Cambridge and the popularity of the Monarchy

I appeared on BBC News TV yesterday to discuss the success of the Duke and Duchess of Cambridge's tour of New Zealand and to examine and compare the popularity of the Monarchy in Australia and New Zealand.


Posted by heydel-mankoo.com at 10:56 No comments: