Recipe published by The Empire Marketing Board (c.1926-1933), with the permission of King George V, for an Empire Christmas Pudding containing ingredients from every corner of the British Empire. One wonders whether one could easily obtain the ingredients today? 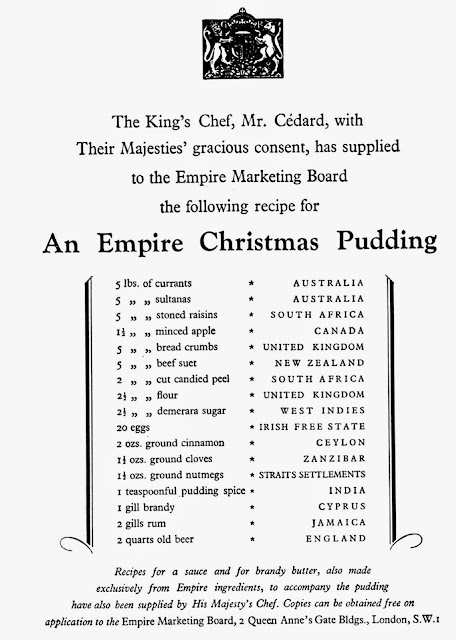 Posted by heydel-mankoo.com at 22:07 No comments:

Monarchists and traditionalists will be disappointed and saddened to learn today that Australia's conservative and staunchly monarchist Prime Minister Tony Abbott is not in favour of the restoration of Australian knighthoods as titular grades within the Order of Australia.

As the Australian Prime Minister is an unapologetic traditionalist, many had pinned their hopes on him to restore these great symbols of independent national identity; however it appears that Mr. Abbott may wish to avoid repeating the controversy that surrounded the knighthoods when they were first introduced in 1976. Whilst not an end to the matter, this will be a blow for campaigners -- for without the support of such a normally enthusiastic Prime Minister, it is difficult to see how indigenous Australian knighthoods can now be achieved.

Speaking to Australia's Sunday Telegraph, PM Abbott said: "It's true that some people have said to me: 'What about doing what New Zealand did'...but I don't think it would be practical to just rebadge ACs. There was a rarity to their AC equivalent which made it easier for them to do this....I don't think New Zealand is a relevant model here. The problem is they just basically converted there (sic) ACs into knighthoods. I just don't think that's realistic in this country."


Mr. Abbott is incorrect. New Zealand did not convert their equivalent of ACs (Companion of the Order of Australia) into knighthoods. Far from it. New Zealand has a 5 grade New Zealand Order of Merit, the two highest grades of which were originally knighthoods but, for a short time, were renamed to non-titular grades before being converted back into knighthoods in 2009. No grades were abolished. Australia, in contrast, had a 5 grade Order of Australia, with a grade of knighthood which ranked above Companion. The grade of knighthood was abolished in 1986, leaving Australia with a 4 grade Order. The issue for Australia is therefore not of "converting" Companions (ACs) into knighthoods but, instead, of restoring the rank of knighthood/damehood (AK/AD) above Companions. That is a different matter entirely, one that is both achievable and desirable.

As Mr. Abbott has been misinformed about this issue, it is hoped that better information might lead him to a different view.

Inspired by the Order of Canada, the Order of Australia was established on 14th February 1975. The Queen of Australia instituted it as a society of honour for the purpose of according recognition to Australian citizens for achievement or for meritorious service.

The Order of Australia comprises a general and a military division and originally had three classes: companion, officer and member. The Queen is Sovereign of the Order and the Governor General is Chancellor and Principal Companion.

It was in 1976, during the premiership of Malcolm Fraser, that the letters patent constituting the Order were augmented to include the level of knight/dame (AK/AD) of the Order of Australia, to rank above the class of Companion. At the same time a medal was also added, to rank below the class of Member.

The Medal, which, unlike the British Empire Medal and Royal Victoria Medal, is regarded as a class of the Order, allowed for a much needed increase in the number of awards available to recognise those taking a leadership role in local communities and was uncontroversial. The same could not be said for the introduction of Australian knighthoods.

Several distinguished Australians such as novelist and Nobel laureate HC Coombs, who had refused knighthoods in the Imperial Honours system but had been the first to take the new Companion of the Order of Australia, promptly resigned on principle -- and probably because they did not appreciate the existence of a new class above theirs.

During this brief period a total of fourteen knights/dames had been appointed. Although the class was discontinued, holders of the distinction were and are permitted to retain their rank and title. Today, there are two living Knights of the Order of Australia: HRH The Prince of Wales and The Rt. Hon. Sir Ninian Stephen, KG, AK, GCMG, GCVO, KBE, QC, former Governor General of Australia.

It is interesting to wonder whether, had there been more Australian knights, Mr. Abbott might have been persuaded to reach a different decision and follow the precedent set by his neighbour, Prime Minister John Key of New Zealand, who encountered little problem restoring indigenous knighthoods to New Zealand in 2009. The decision was popular and the public response was highly enthusiastic.

New Zealand shows that nations can be modern, dynamic and progressive global leaders without abandoning their traditions, honours and symbols.

Established in 1996, the New Zealand Order of Merit original comprised five classes the two highest of which (knight/dame grand companion and knight/dame companion) conferred a knighthood or damehood.

On 10 April 2000 it was announced that following the earlier recommendations of the Prime Minister’s Honours Advisory Committee (1995) The Queen had approved the discontinuance of the two titular classes and their replacement with two new designations: principal companion and distinguished companion. These changes were instituted by a Royal Warrant dated 18 May 2000.

The first appointments to the re-designated levels were made in The Queen’s Birthday Honours issued on 5 June 2000. The five classes became: principal companion, distinguished companion, companion, officer and member.

Those who were previously invested as knights or dames of the New Zealand Order of Merit were permitted to continue to bear the honorific; the wife of a knight, provided she used her husband’s surname, could continue to bear the courtesy title of ‘lady’ before the surname.

In March 2009 it was announced that, upon the approval of HM The Queen, the titles of knight and dame grand companion and knight and dame companion were to be reinstated. There had been considerable belief that the removal of knighthoods had diminished the value of the two highest classes of the New Zealand Order of Merit. A visible titular honour was regarded as the most appropriate means of celebrating success at the highest levels of national life.  The first appointments to the reinstated levels were made in The Queen’s 2009 Birthday Honours List.

The quite remarkable fact that 85% of recipients chose to convert their non-titular honours into knighthoods/damehoods reveals precisely how valued these titles are across the vast spectrum of society -- people of all classes and political views appreciate the distinction of titular honours.

It is highly regrettable that the current Australian Prime Minister, a traditionalist in so many other areas, has failed to appreciate the great good that the restoration of knighthoods to the Order of Australia would do for the country.

Let us hope Mr. Abbott's mind can be changed.
Posted by heydel-mankoo.com at 11:40 2 comments:

Peter O'Toole, 14th Earl of Gurney in "The Ruling Class"


My letter to the editor of The Daily Telegraph:

In two of your tributes to Peter O'Toole ("Appreciation" p.7 and "Obituary" p.21, Daily Telegraph, 16 Dec. 2013) it is claimed that the great thespian played a "mad" or "beserk" British baronet in the cult film, The Ruling Class.

O'Toole's character was, in fact, the 14th Earl of Gurney. Those familiar with the film will appreciate how much offence this twice committed error of demotion would have caused the Gurneys -- for not even two baronets can equal an earl.

The Gurneys are not here to defend their honour, but one can well imagine the brusque letter the 14th Earl's patriotically prejudiced father would have written: "We are not British baronets, sir! We are English earls!"

Posted by heydel-mankoo.com at 20:36 No comments: 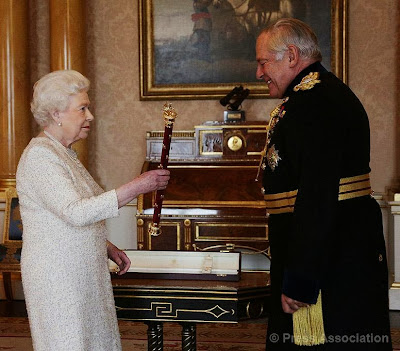 Britain only has eight living field marshals, three of whom are members of the Royal Family: HRH The Duke of Edinburgh, HRH The Prince of Wales and HRH The Duke of Kent. In recent decades it was the practice to appoint Chiefs of the (Imperial) General Staff to the rank of Field Marshal on the last day of their appointment whilst Chiefs of the Defence Staff would become Field Marshals upon the first day of their appointment. However, since the 1990s service chiefs have not been able to expect these 5 star appointments -- instead, promotion to the rank of field marshal, admiral of the fleet or marshal of the Royal Air Force are seen as special appointments or reserved honours. Lord Guthrie was actually the first Chief of the Defence Staff not to become a Field Marshal upon his appointment (the last CDS to be appointed was Lord Inge in 1994). Britain therefore had a period of 18 years without the appointment of any new Field Marshals. This was remedied in 2012 when Lord Guthrie was appointed a Field Marshal along with The Prince of Wales (who, in preparation for his future role as Commander-in-Chief, also got 5-star ranking in the Royal Navy and Royal Air Force as Admiral of the Fleet and Marshal of the Royal Air Force).

The five Chiefs of the Defence Staff that have served since Guthrie are not Field Marshals (but they are all Knights Grand Cross of the Order of the Bath).

Posted by heydel-mankoo.com at 21:19 No comments:

Annual Carol Concert of the Polish Association of the Knights of Malta (UK) at St. Clement Danes, London 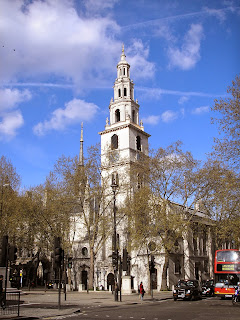 On Tuesday, 3rd December there was a special performance of Carol of the Bells: A Polish Christmas Night held at the historic and stunning St Clement Danes Church, the Central Church of the Royal Air Force in central London. Guests were able to enjoy Christmas carols from both Polish and English whilst sipping mulled wine, eating Christmas cakes and wandering the indoor Christmas market. 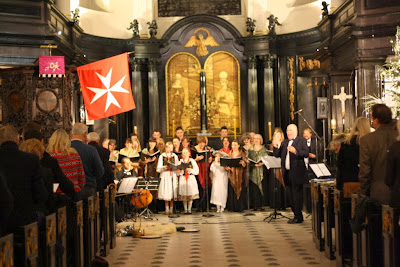 London's leading Polish choir Ave Verum along with Schola Gregoriana and the noted Soloist Natalie Coyle performed a programme of moving Christmas works in Polish and English. We were pleased to welcome BBC World News Presenter Kasia Madera as our guest reader.

This is the third annual carol concert organised by the Polish Order of Malta Volunteers (UK) and was held in aid of the Polish Association of the Knights of Malta's Oncological Centre in Poznan and the Polish Psychologists' Association in the UK.

The Association is supported by our President the Earl of St Andrews, our Patrons HE the Ambassador of the Republic of Poland, Field Marshal The Lord Guthrie and The Rector of the Polish Catholic Mission for England and Wales Rev Rector Stefan Wylężek. 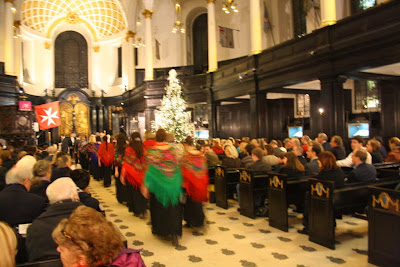 An important part of the carol service is the laying of a wreath on the Polish Air Force Memorial, which commemorates the Polish contribution during the Battle of Britain and throughout the Second World War.

Posted by heydel-mankoo.com at 20:25 No comments: