Britain created modern sport -- why was this ignored in the Olympic Opening Ceremony? 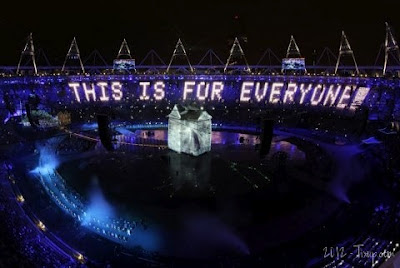 Much has been written about the opening ceremony of the London 2012 Olympic Games, most of it overwhelmingly positive. On the whole, I thought it was a tremendous success -- and one which I thoroughly enjoyed. Of course, it is impossible to please everyone and some aspects of it have been criticised both at home and abroad. At home, many critics have complained, rightly or wrongly, that several segments were marred by an overtly left-wing / liberal bias (most notably the focus on the NHS). Abroad, critics have expressed disappointment that so much of the production was bewildering and mystifying to foreign audiences unfamiliar with various aspects of British history and culture.

It is beyond the scope of this blog to cover popular culture -- and there is little point repeating what has already been written -- however, as much as I enjoyed the ceremony (and I certainly do not wish to appear unduly negative -- it was a great show) I thought it profoundly regrettable that the organisers did not seize upon this unique opportunity to highlight what, in the context of the Olympics, should have been the most obvious and relevant British achievement -- the creation of modern sport.

With an almost missionary zeal, the British spread these sports, and the general concept of sportsmanship and organised sport as competition and pastime, throughout the British Empire and, subsequently, the wider world. Britain may no longer excel or lead the world in actually winning many of these sports, but no country on the face of the earth has made a greater contribution to the world of modern sport.

The opening ceremony of the Olympic Games is intended in part to focus upon the ideals of the Olympic spirit. How strange, then, that the unique opportunity to celebrate this remarkable British legacy in front of a global audience was ignored. I wager that most citizens of the world, many of whom are no doubt largely ignorant of the extent of Britain's contribution, would have found this enduring legacy considerably more interesting and relevant than the curious focus upon a subject as parochial as the National Health Service.

The great Sir Tim Berners-Lee, the inventor of the World Wide Web, made a splendid cameo appearance in the opening ceremony. He famously gave his invention to the world for free, and the organisers acknowledged this by spelling out the phrase "THIS IS FOR EVERYONE" in LCD lights across half of the stadium. It was a tremendous piece of theatre --- but I could not help but reflect that the same phrase could have been used in reference to the British gift of sport.

In the end, it fell upon an outsider, Count Jacques Rogge, President of the International Olympic Committee, to point out in his speech the fact which should have been a key component of the ceremony:

"In a sense, the Olympic Games are coming home tonight. This great, sports-loving country is widely recognized as the birthplace of modern sport. It was here that the concepts of sportsmanship and fair play were first codified into clear rules and regulations. It was here that sport was included as an educational tool in the school curriculum.

"The British approach to sport had a profound influence on Pierre de Coubertin, our founder, as he developed the modern Olympic movement at the close of the 19th century."

As much as I enjoyed the spectacular opening ceremony for the world's greatest sporting event, I cannot help but feel a deep sense of regret at this missed opportunity to celebrate Britain's unique and unequalled contribution to the very subject which is the focus of the Olympics.
Posted by heydel-mankoo.com at 22:50 No comments: 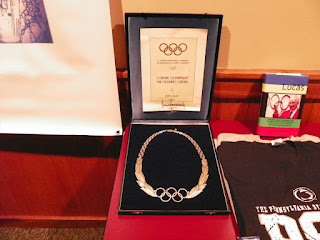 Rather less familiar is the Olympic Order.

The Olympic Order was instituted by the International Olympic Committee in 1974. The Order is the premier honour of the Olympics and is conferred upon those who have rendered outstanding service to the Olympic movement or who are deemed to epitomise the essential ideals of the Olympics. The Order originally comprised three grades (gold, silver and bronze) however the lowest grade (bronze) was abolished in 1984. 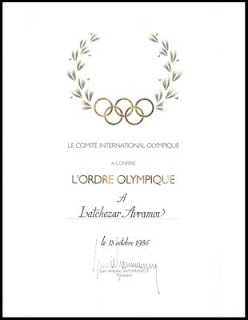 At each Olympic games the principal organiser will be invested with the highest grade during the closing ceremony. We can assume that Lord Coe will receive it in this manner.

Recipients are presented with a certificate. 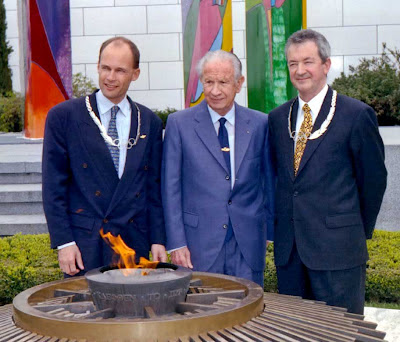 Posted by heydel-mankoo.com at 10:52 No comments:

"Even the Duchess of Cambridge Must Bend. HRH may be the crown jewel of the Windsor clan, but she still has to curtsy to Prince William’s cousins"

I was interviewed by Canada's leading Macleans Magazine for the article that appeared in last week's print issue (authored by Mike Rekai on July 10, 2012) and which is reproduced below: 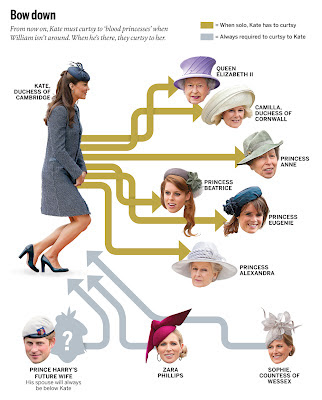 While her life may seem like a paradise of far-flung travels, generous clothing budgets and polo matches, Catherine, duchess of Cambridge, is still, in some circumstances, a second-tier royal.
Last week, the house of Windsor updated its official protocol; Kate, it stipulates, must now curtsy to “blood princesses” when Prince William, her husband, is not present (when they are together, she retains his status). While she may be a future queen consort, she was still born of common blood.
It all boils down to the so-called “order of precedence”—the royal ranking. There are in fact two rankings: one used when William and Kate are together, another when Kate is alone. The latter “places princesses who were born royal above those who were not,” explains Rafal Heydel-Mankoo, co-editor of Burke’s Peerage & Gentry.
According to the document, a William-less Kate is required to curtsy to Beatrice and Eugenie—the party-hardy twentysomething daughters of Prince Andrew and Sarah Ferguson—as well as Anne, Alexandra, a little-known royal, and even Camilla, Charles’s former mistress, who, as wife of the heir to the throne is ahead of Kate on the female pecking order.
While Windsor enthusiasts on both sides of the Atlantic may be surprised to learn that the duchess is afforded less status than the girls best known outside the royal family for wearing outlandish hats to her wedding, Heydel-Mankoo says that precedence is rarely followed by the younger royals, who interact much more casually than previous generations. “In private, the duchess of Cambridge, and all the family, would curtsy to the Queen, of course, and the duke of Edinburgh because he is the patriarch of the family, but you certainly won’t find younger royals curtsying to each other.”
Though precedence is still maintained at public events, there was a time when it was rigidly enforced even behind palace doors. In the ’50s, he says, the Queen’s cousin-in-law, the duchess of Kent, regularly curtsied to the Queen’s sister, Princess Margaret—“but Princess Margaret was a formidable woman,” he explains, “and very particular about these things.” Since then, the rules have become more flexible. Nowadays, you won’t see Alexandra, the Queen’s cousin, curtsying to the Princess Royal, the Queen's daughter; neither will you see Zara curtsy to her "royal highness" cousins Beatrice or Eugenie, he says—“that’s just not going to happen.”
Nor will Kate be relegated to a commoner’s place in the royal family. On the contrary, her high profile throughout the Diamond Jubilee is a testament to how serious the Queen is about the new royal’s place within the Windsor family. It’s clear, says Heydel-Mankoo, “that the duchess of Cambridge is about as close to the heart of the monarchy as it is possible to be.”
Source: http://www2.macleans.ca/2012/07/10/britain-the-duchess-must-bend/
Posted by heydel-mankoo.com at 01:06 No comments: 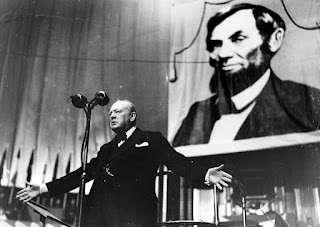 On this anniversary of the American Declaration of Independence, I post below a speech delivered by Winston Churchill in London on this date in 1918.

A Declaration of interdependence: commemoration in London in 1918 of the 4th of July, 1776: resolutions and Addresses at the Central-Hall, Westminster, with an introductin by George Haven Putnam. New York, [1918]. 32 pp.
THE FIRST RESOLUTION CABLED FROM THE MEETING TO PRESIDENT WOODROW WILSON, WHITE HOUSE, WASHINGTON, D. C.
At this representative meeting of Anglo-Saxon fellowship, assembled at the Central Hall, Westminster, London, and presided over by the Right Honourable Viscount Bryce, O.M., the following resolution proposed by the Right Honourable Winston S. Churchill, and seconded by the Honourable A. Meighen, was carried with acclamation:--
"This meeting of Anglo-Saxon Fellowship, assembled in London on July 4th, 1918, send to the President and people of the United States their heartfelt greetings on the 142nd anniversary of the declaration of American Independence.
"They rejoice that the love of liberty and justice on which the American Nation was founded should in the present time of trial have united the whole English-speaking family in a brotherhood of arms. They congratulate the United States and Navy on the marvellous achievement involved in the safe transportation to the battlefields of Europe of the first million soldiers of the American Army. They affirm their devotion to the noble and righteous cause in which we are fighting and their faith that by the help of God a complete and lasting victory will be won for freedom and humanity." 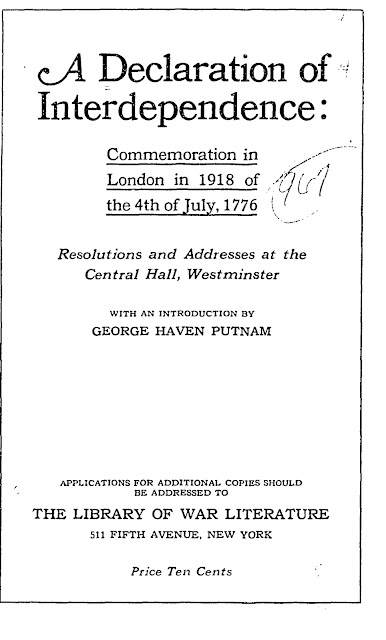 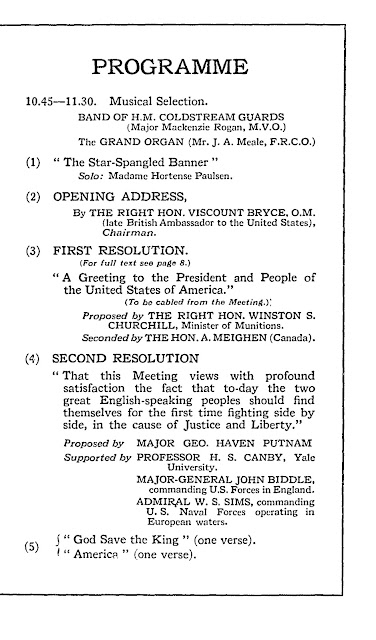 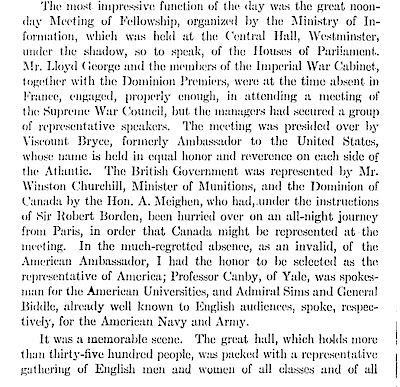 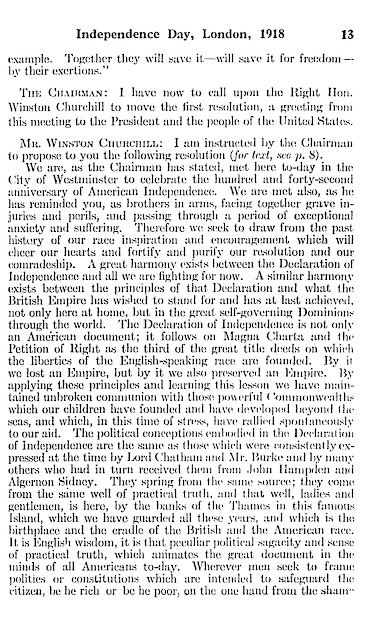 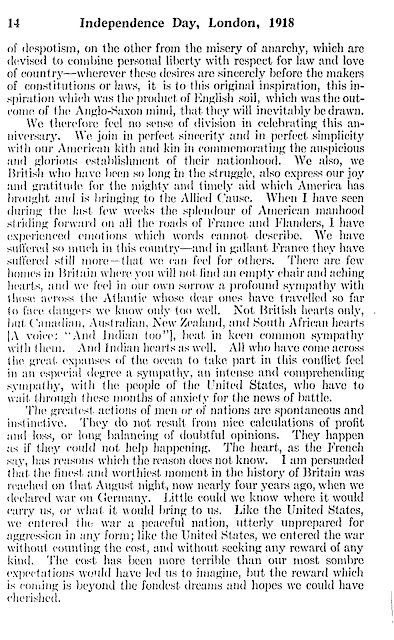 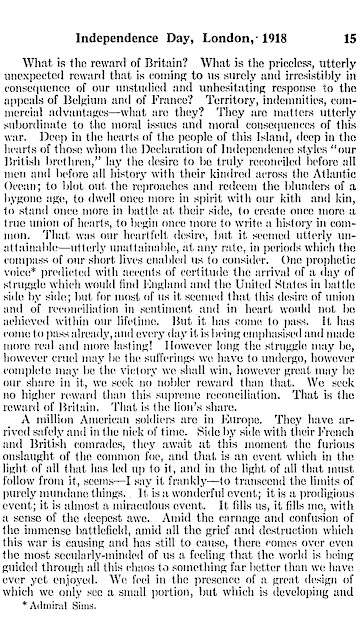 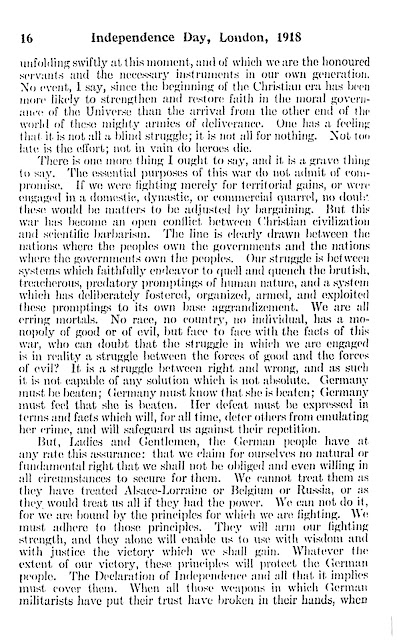 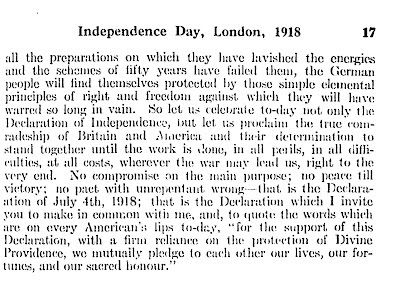 Hat Tip to Classic Works of Apologetics for the source material.


Posted by heydel-mankoo.com at 04:50 No comments: