One Year On: Public Love Affair with William and Catherine Remains Strong 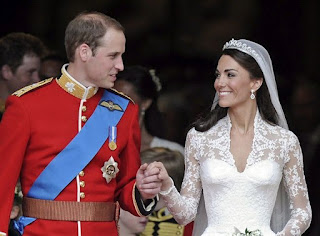 I am quoted in today's Canadian Press article marking the first anniversary of the wedding of TRH The Duke and Duchess of Cambridge.

By Michelle McQuigge, Canadian Press
TORONTO - It's been a year since they declared their love for each other in the most anticipated wedding of the decade, but 12 months haven't been enough to quell the public passion for the newest royal couple.
Prince William and Kate spent their first year as newlyweds under the sort of global spotlight usually reserved for Hollywood a-listers. Their every appearance has been mobbed with adoring crowds and their slightest remarks analyzed for possible suggestions that they're preparing to bring a future monarch into the world.
Through it all, royal-watchers say the Duke and Duchess of Cambridge have managed to carve out a private life while still living up to lofty public expectations.
"They've played a perfect year," commentator Rafal Heydel-Mankoo said in a telephone interview. "They've covered all the bases. They've had an international trip, they've had local visits, work with charitable causes. They've engaged in their work roles admirably. I think you could really give them a 10 out of 10 when it comes to their performance over the first year."
William and Kate were public darlings for months before their glamorous wedding ceremony at London's Westminster Abbey.
On that day, thousands mobbed the streets of London while millions more around the world tuned in from home to watch the future heir to the throne wed his college sweetheart.
The couple retreated from the spotlight after their nuptials, only to re-emerge with greater star power than ever on their first visit abroad. The newlyweds' nine-day, whirlwind tour of Canada, observers say, showed the couple of at their best.
Their more informal attitudes set the tone for the trip as they freely mingled with rapturous crowds, participated in Canadian sports such as street hockey and faced off against one another in a dragonboat race. Kate's now legendary fashion sense was also on full display as she modeled outfits from homegrown designers and even donned the national colours in honour of Canada Day.
"Canada was really the country that made them as a royal couple," Heydel-Mankoo said.
Susan Catto, deputy editor of celebrity magazine Hello Canada, agreed. Canadians were thoroughly charmed by the new generation of royals, she said, adding reader interest in the couple has been unprecedented.
Enthusiasm for Kate _ who enjoyed a middle-class upbringing before marrying into the monarchy _ has resonated most with a country in the process of rediscovering its royal heritage, she said.
"There's a lot of admiration for her grace under pressure and the decorum that she's shown in the role," Catto said. "I think Canadians do appreciate the traditions of the royal family, and I think there's an appreciation for the fact that she has not put a foot wrong."
Certainly she has brought a lot of lustre to the family."
Much of Kate's comportment is the result of lessons learned in the aftermath of previous broken royal marriages, observers said.
Royal historian Carolyn Harris said William's mother Diana and former aunt Sarah Ferguson both complained about feeling isolated and overwhelmed in their first years of marriage to royalty. Kate has received extensive coaching on maintaining a balance between public and private responsibilities, she said.
Between official engagements at home and abroad, the couple live in comparative seclusion in Wales, she said. William has continued his military career as a search and rescue pilot and recently completed a six-week deployment to the Falklands earlier this year.
The fact that William and Kate have managed to carve out a private life, Harris said, has helped to preserve their mystique by making sure they're not over-exposed in the public eye.
That fascination has fuelled the constant speculation about when the couple can expect their first child, a subject on which both have remained tight-lipped.
"It speaks to the Duke and Duchess of Cambridge's personal popularity that there's so much interest in the royal family continuing through that direct line," Harris said. "That shows how well-regarded they are."
William and Kate have announced they will recognize their first wedding anniversary in a private celebration.
Original Source: http://www.winnipegfreepress.com/canada/public-love-affair-with-william-and-kate-remains-strong-149407175.html
Posted by heydel-mankoo.com at 13:20 No comments: 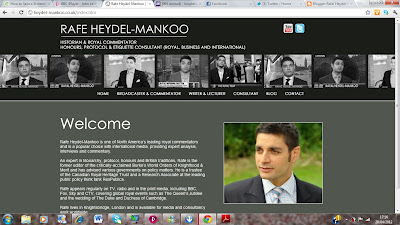 I am pleased to announce the launch of my website: www.heydel-mankoo.com   This site focusses on my work as a royal commentator, writer & lecturer, and honours, protocol & etiquette consultant. Kind regards, RHM
Posted by heydel-mankoo.com at 16:21 No comments:

I have finally decided to create a video show reel featuring a selection of clips from some of the broadcasts I have made over the past 15 years. I post it below should it be of any interest to anyone.

Posted by heydel-mankoo.com at 23:37 No comments:

This month marks the 10th anniversary of the death of HM Queen Elizabeth the Queen Mother. The 5th April 2002 was the date of the Ceremonial Procession to the Lying-in-State at Westminster Hall. In commemoration of that event I post below the full-length broadcast coverage from 2002, which includes my live running commentary.
Posted by heydel-mankoo.com at 15:17 No comments: