Today, 30 May 2011, marks the 15th anniversary of the institution, by Royal Warrant, of The New Zealand Order of Merit in 1996.[1] The Order ranks second to the Order of New Zealand and is awarded to those “who in any field of endeavour, have rendered meritorious service to the Crown and nation or who have become distinguished by their eminence, talents, contributions or other merits”. The motto of the Order is FOR MERIT and, in Maori, TOHU HIRANGA (“To Achieve Excellence”). Citizens of those countries of which The Queen is sovereign are eligible for ordinary membership. The constitution of the Order allows for the appointment of “additional” members on significant royal, national or state occasions.  Foreign citizens and citizens of Commonwealth countries of which The Queen is not sovereign may be appointed as “honorary” members. Honorary and additional appointments are extra-numerary. The New Zealand Order of Merit has its own herald, in the person of Mr. Philip O’Shea, New Zealand Herald Extraordinary.
Of the Order’s original five classes the two highest (knight/dame grand companion and knight/dame companion) conferred a knighthood or damehood. On 10 April 2000 it was announced that following the earlier recommendations of the Prime Minister’s Honours Advisory Committee (1995) The Queen had approved the discontinuance of the two titular classes and their replacement with two new designations: principal companion and distinguished companion. These changes were instituted by a Royal Warrant dated 18 May 2000. The first appointments to the re-designated levels were made in The Queen’s Birthday Honours issued on 5 June 2000. The five classes became: principal companion, distinguished companion, companion, officer and member.[2]
Those who were previously invested as knights or dames of the New Zealand Order of Merit were permitted to continue to bear the honorific; the wife of a knight, provided she used her husband’s surname, could continue to bear the courtesy title of ‘lady’ before the surname.
In March 2009 it was announced that, upon the approval of HM The Queen, the titles of knight and dame grand companion and knight and dame companion were to be reinstated. There had been considerable belief that the removal of knighthoods had diminished the value of the two highest classes of the New Zealand Order of Merit. A visible titular honour was regarded as the most appropriate means of celebrating success at the highest levels of national life.  The first appointments to the reinstated levels were made in The Queen’s 2009 Birthday Honours List. The 85 New Zealanders who were appointed principal companions and distinguished companions between 2000 and 2008 were afforded an opportunity to be re-designated to the appropriate level of knight/dame grand companion or knight/dame companion. 72 of those eligible opted to convert to the appropriate titular honour, a clear indication of the popularity of knighthoods.
No more than thirty persons may belong to the class of knight/dame grand companion at any one time. According to the statutes of the Order, no more than fifteen knight/dame companions, forty companions, eighty officers and one hundred and forty members may be appointed per annum.
Additional members may be admitted to the Order in commemoration of any important royal, state, or national occasion, or to recognise military services rendered in war-like and peacekeeping operations. Additional members are extra-numerary.
Famous past recipients include the golfer Sir Bob Charles, the rugby player Sir Wilson Whineray and the author Mrs Linley Dodd.
Insignia: 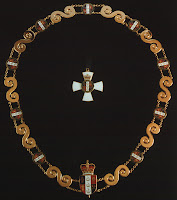 The collar of the Order is composed of links of the badge’s obverse roundel and gold koru (in the form of the letter “S”). The badge of the Order hangs from a representation of the New Zealand coat of arms positioned in the centre of the collar. 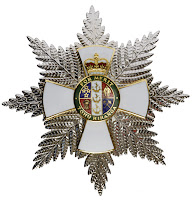 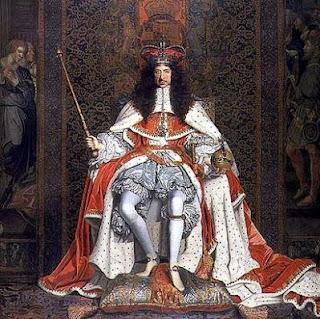 "On this day in history in 1660, Charles II was restored to the throne.

This day is known as Restoration Day, Royal Oak Day or Oak Apple Day and commemorates the day when Cromwell’s Commonwealth was abolished and the monarchy restored.

Charles was in exile in France and returned to London, arriving on his thirtieth birthday, 29th May 1660, accompanied by tumultuous rejoicing. The day was declared a public holiday in perpetuity, it lasted until 1859, and became known as Oak Apple Day, a reference to the aftermath of the Battle of Worcester when Charles escaped capture by hiding in an oak tree.

Pepys recorded in his diary: “Parliament had ordered the 29th May, the King’s birthday, to be for ever kept as a day of thanksgiving for our redemption from tyranny and the King’s return to his Government, he entering London that day.”

Charles had a long and popular reign and became known as the Merry Monarch, in complete contrast to the previous regime. Theatres were opened, dancing and public entertainment were permitted once again and feasting and drinking became a way of life."

"Resolved, That a Bill be prepared for keeping of a perpetual Anniversary, for a Day of Thanksgiving to God, for the great Blessing and Mercy he hath been graciously pleased to vouchsafe to the People of these Kingdoms, after their manifold and grievous Sufferings, in the Restoration of his Majesty, with Safety, to his People and Kingdoms: And that the Nine-and-twentieth Day of May, in every Year, being the Birth Day of his Sacred Majesty, and the Day of his Majesty's Return to his Parliament, be yearly set apart for that Purpose..." , Journal of the House of Commons: volume 8: 1660-1667 (1802), pp. 49-50. 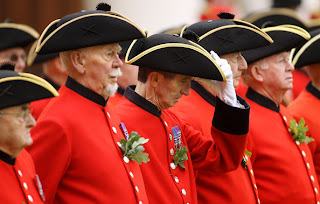 Amongst the traditional celebrations that take place across the country is the Founder's Day Parade at the Royal Hospital Chelsea, which was founded by King Charles II. The Chelsea Pensioners are usually reviewed by a member of the Royal Family. During the course of this celebratory day the statue of Charles II in Figure Court is partly shrouded in oak leaves, and all participants in the Parade and spectators wear sprigs of oak leaves to commemorate the King's escape from forces after the Battle of Worcester in 1651. The statue was re-gilded in 2002 to commemorate the Golden Jubilee of Queen Elizabeth II.

Posted by heydel-mankoo.com at 07:51 No comments:

You are receiving this message automatically because you are subscribed to the mailing list for Reflections of a Young Fogey:

THE Royal Wedding was one of the most watched TV events in Australian history - a big blow for republicans.
More than seven million Australians tuned in to see Prince William marry Kate Middleton to eclipse sporting events and become one of the most popular spectacles of the past 10 years.
The success of the event has sparked proud monarchists to jubilantly proclaim Australia will not seriously consider becoming a republic for another 100 years.
Royalist David Flint said Australians had "voted overwhelmingly with their remote controls" and destroyed any meaningful call for Australia to become a republic.
"This really is quite a magnificent result," Prof Flint said.
"Australians, in their millions, have confirmed their great interest in keeping a constitutional monarchy."Prime Minister Julia Gillard has previously said the Queen should be Australia's final monarch.
But Prof Flint said he saw no hope for republicanism.
"When the Queen dies there will be a coronation that will receive as much interest, if not more, than this royal wedding," he said.
"Then there will be the interest in William and Kate's future children, Prince Harry marrying and his children, Prince William becoming king.
"I can't see republicanism being a serious political force in this country for at least 100 years when you add the generations together."
But Simon Bateman, of the Victoria branch of the Australian Republic Movement, said he was not surprised so many people watched the wedding.
"The royal wedding has received astronomical media coverage so it does not surprise me that so many people watched it," Mr Bateman said. "I watched it and enjoyed it. It was a great event.
"But a republic is not anti-royal or anti-British - it's simply recognising Australia is not Britain bit its own country. Australians value the royal institution but I think the vast majority of people would rather a head of state based on merit, not genetics."
Globally, more than two billion people watched the ceremony, with 400 million more watching on the web.
Channel 7 won the ratings battle, followed by Nine with the ABC taking third spot.
Nine was awarded clanger of the evening, after its commentary team accidentally placed Dodi al-Fayed, the late former lover of Princess Diana, at the wedding. It was, in fact, the King of Tonga.
Social analyst David Chalke said the royal wedding had four key ingredients that drew Australians in: culture, ceremony, celebration and celebrity.
"There were five people to three in favour of Australia keeping the monarchy before the wedding and I estimate that will now rise to two people to one in favour," Mr Chalke said.
"The world is a lot less certain, a lot less friendly than it was and I think Australians are locking into their culture and want to keep strong ties."
Link to original article: http://www.adelaidenow.com.au/news/in-depth/big-show-a-blow-to-republic-hopes/story-fn887wv7-1226047675778
Posted by heydel-mankoo.com at 04:10 No comments: