An important speech in defence of monarchy 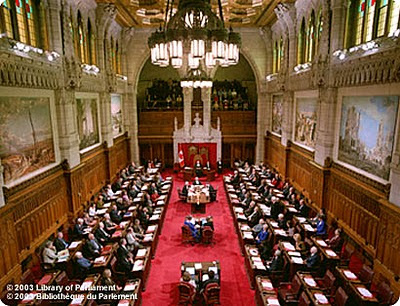 Essential reading for all monarchists!!!

Canadian politicans are not necessarily known for their erudition in matters royal and monarchical. Senator Macdonald is therefore to be congratulated on his superb address to the Senate of Canada earlier this week in which he eloquently and learnedly presented the case for the Canadian Crown.

This speech should serve as an educational tool and should be spread far and wide. I encourage all monarchists to disseminate this speech -- for its contents address many issues which are fundamental to our beliefs:

On the Order:
Resuming debate on the motion of the Honourable Senator Joyal, P.C., seconded by the Honourable Senator Banks:
Whereas the $5, $10 and $50 Canadian banknotes represent Sir Wilfrid Laurier, Sir John A. Macdonald and W.L. Mackenzie King respectively, and whereas each of these bills clearly mention in printed form their name, title and dates of function;
Whereas the 20$ banknotes represent a portrait of H.M. Queen Elizabeth II but without her name or title;

HM The Queen to visit Ireland

The Queen is to become the first monarch to visit Ireland since her grandfather, George V, in 1911.