Conjugal Arms of TRH The Duke and Duchess of Cambridge Revealed

The Conjugal Arms of TRH The Duke & Duchess of Cambridge, which had been formally approved by HM The Queen in February, were revealed to the public yesterday, 27 September 2013. Conjugal Arms do not alter the separate and distinct individual shields of The Duke or The Duchess -- they are merely a means of identifying a married couple by displaying their shields side by side.

Although not seen very often, Conjugal Arms are firmly rooted in royal tradition and have been used by HM The Queen & HRH The Duke of Edinburgh as well as by TRH The Prince of Wales & The Duchess of Cornwall. Conjugal Arms are traditionally seen on occasions when both husband and wife are performing or are present at official ceremonies or events. In such circumstances, one may expect to see the Conjugal Arms displayed on ceremonial plaques, memorials etc.

As would be expected, the Conjugal Arms have been designed by the College of Arms. Over time, as the Duke of Cambridge's status evolves, so too will his own coat of arms and, by automatic extension, the Conjugal Arms.

The Coat of Arms of The Duke of Cambridge is based on the Royal Arms but is distinguished by the use of a 3-pointed white label of difference bearing a red escallop on the central point. The red escallop is taken from the arms of The Duke's late mother. Again, to difference his arms from those of The Sovereign, the same label is used as a collar around the necks of The Duke's Lion and Unicorn supporters and his Lion crest.

The Duke's shield (as depicted in the Conjugal Arms) is encircled by the Order of the Garter, the United Kingdom's oldest Order of Chivalry. In 2008 HRH became the Order's one-thousandth knight.


The Coat of Arms of The Duchess of Cambridge was granted following her marriage to Prince William. The shield combines the shield of her original arms (the Middleton arms were granted to her father, Michael Middleton in 2011) with those of her husband. By Royal Warrant, The Duchess was also accorded the Coronet of the Duke of Cambridge (the style of coronet being appropriate for the son of the Heir Apparent) and supporters. As is traditional for the wife of a member of the Royal Family, one of The Duchess's supporters is taken from her husband (the Lion with a collar composed of a white label of three points bearing a red escallop on the middle point). The second supporter is a white hind with the ducal coronet around its neck.

The Duchess's shield (as depicted in the Conjugal Arms) is encircled by a wreath of oak -- this is simply to provide artistic balance to the Order of the Garter that encircles the Duke's shield. The wreath will eventually be replaced upon the Duchess's appointment to an order (the first order is likely to be the Royal Victorian Order).


Posted by heydel-mankoo.com at 11:22 No comments:

Canadian Portrait of HM The Queen Unveiled at Rhodes House, University of Oxford

On 20th September a reception was held at Rhodes House at the University of Oxford to mark the unveiling of an unofficial Canadian portrait of HM The Queen. The portrait, which depicts Her Majesty in a suitably regal manner, was painted by the noted Canadian portrait painter (and full time medical doctor) Dr. Suan-Seh Foo of Toronto. The painting was donated to Rhodes House by the great Canadian philanthropist Dr. Terrence Donnelly, LL.D., O.Ont, also of Toronto.

Home to the world famous Rhodes Scholars, Rhodes House is an enduring testament to the unity of the English Speaking Peoples and the common values, beliefs and interests that they share. The building features innumerable symbols and references to the United States and the various countries, colonies and regions that constituted the British Empire in 1928.


Posted by heydel-mankoo.com at 14:15 No comments:

The Queen Charlotte's Ball is a firm fixture on London's social calendar. In recent years we have been overawed at the the spectacular venues, the glamorous decoration, the impressive turnout and, of course, the elegance and beauty of the debs. 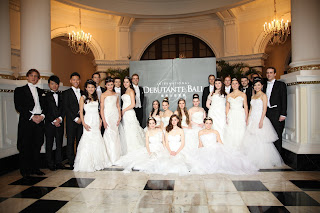 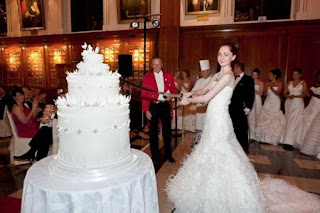 This years's Queen Charlotte's Ball looks set to be one of the best ever. Continuing the tradition of selecting truly unique and special venues, the 2013 ball will be held in the majestic Royal Courts of Justice in Central London. If you have never visited this magnificent building before, there can be no better occasion to attend the Ball.

I encourage you to support both this worthy cause and this noble and gloriously enjoyable annual tradition.

Ticket information (individual and by table) is available directly from the organiser:

The Queen Charlotte's Ball - Queen of the Season

For generations, the British social "Season" has been a source of fascination and bewilderment, both at home and abroad. Our modern-day global obsession with television programmes such as Downton Abbey, suggests that interest in the lifestyles of the traditional upper classes is as popular as ever.

Traditionally, the Season centred upon the Royal Family's residence in London from April to July and from October until Christmas. During those months, the British aristocracy would desert their country piles and flock to London in order to be close to the Royal Court.

Of course, during the centuries in which European sovereigns wielded immense political power, ambitious aristocrats would be expected to attach themselves to their monarch's royal court as it journeyed around their kingdoms, or settled in specific locations such as Versailles. By the eighteenth and nineteenth centuries, however, the rise of political parties and the principle of responsible government had significantly curtailed royal involvement in political life and the centre of power shifted inexorably from the Royal Court to Parliament.

Political decline made the symbolic and ceremonial roles of the Crown all the more important. The Monarch had to be seen. The Royal Court had lost none of its social cachet -- but its followers were now focussed increasingly less on politics and more on glamour, rank, style and fashion. The social "Season" was born. 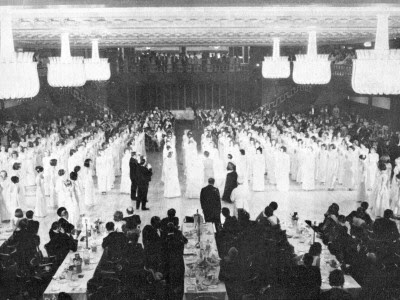 For many years The Queen Charlotte's Ball was the Season's highlight. Instituted by King George III in 1780 to mark the custom of returning to the capital at the end of the hunting season, His Late Majesty named the May Ball after his beloved consort, Queen Charlotte. The Ball soon became the essential platform for introduction to Society. Aged 17 - 18, well-bred debutantes were presented to the Sovereign, their "debut" at the Ball triggering months of balls, parties and other exclusive social events, attendance at which was necessary to ensure that one was part of "Society" (and, most importantly, able to be courted by suitors). These events evolved and developed into what we now know as the "Season" and have become an essential part of an English spring and summer.

Today the annual Queen Charlotte's Ball is run by "The London Season". The Ball's purpose has changed to reflect the realities of 21st century life:

"At the beginning of each academic year, parents and potential debutantes are invited to attend interviews at Boodles, St James. Girls are chosen based on their interest in helping with the charity focus for the year and whom the committee feels would benefit from the events of the year. Debutantes embark on a one-year programme of etiquette classes, and charity events crowned by the world famous Queen Charlotte’s Ball in which they appear in white gowns and jewels lent by eminent couturiers and jewellery houses. At one time, this ball introduced the daughters of the British nobility to potential husbands. Today, officially, the focus is not on marriage but on giving ambitious girls the opportunity to further their careers and develop in social confidence."

Tickets (individual and per table) are eagerly sought and may be purchased by contacting the organiser:


Posted by heydel-mankoo.com at 08:33 No comments: