I am pleased to report that the christening photograph of HRH Prince George with his father, grandfather and great-grandmother has just been released. It is remarkable to think that, together, these photographs currently span almost 200 years and have the potential to eventually span 300 years. Queen Victoria was born in 1819 and, with increased life expectancy and medical/scientific advances, there is every possibility that Prince George will live remain on the throne in 2119. Quite remarkable!


Posted by heydel-mankoo.com at 12:01 No comments:

Details, Guest list and Godparents for The Christening of HRH Prince George of Cambridge at St. James's Palace 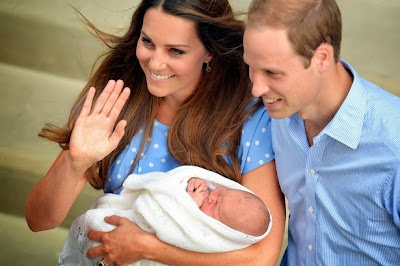 Details of The Christening of HRH Prince George of Cambridge at the Chapel Royal at St. James's Palace have been released today.

In keeping with the desire to have a small and low-key event, only a few guests have been invited.

HM The Queen & HRH The Duke of Edinburgh
TRH The Prince of Wales and The Duchess of Cornwall
HRH Prince Harry of Wales
Mr. and Mrs. Michael Middleton, Mr. James Middleton and Miss Pippa Middleton

Prince George will wear the hand made replica of the Royal Christening Robe, made by Angela Kelly, Dressmaker to The Queen.
HRH Prince George will be baptised by the Archbishop of Canterbury in the Lily Font with water from the River Jordan.
Following the service, The Prince of Wales and The Duchess of Cornwall will host a private tea in Clarence House. Guests will be served christening cake, which is a tier taken from The Duke and Duchess of Cambridge’s wedding cake.
Yesterday, Lambeth Palace released this video in which the Archbishop of Canterbury discussed the "hugely important" baptism of Prince George and expressed his desire that it serve as an inspiration to others.

Posted by heydel-mankoo.com at 10:05 No comments:

"The Royals": Major Documentary Series on the modern history of the Royal Family 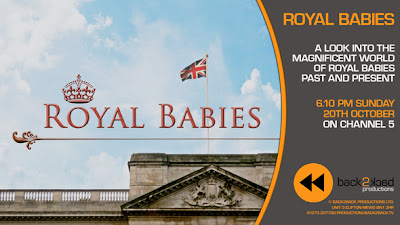 As the world looks forward to the christening of HRH Prince George of Cambridge in the Chapel Royal at St. James's Palace on Wednesday, 23 October, Britain's Channel 5 TV has launched a major new series about the royal family. "The Royals" is a six-part documentary series produced by Content TV and Back2Back productions. Following its UK broadcast, the series, which deals with a range of royal subjects, will be distributed globally.

Perhaps unsurprisingly, the first episode examined the evolution in the treatment of "Royal Babies" over the past several generations. I am pleased to be one of the "talking heads" in this series -- and some of my contributions were broadcast in this episode, which aired last night in the UK. Stay tuned for future episodes covering a broad range of royal subjects (including weddings, funerals, state ceremonies and....pets!).
Posted by heydel-mankoo.com at 10:13 No comments: