Royal Hospital Chelsea Commemoration of the Bicententary of the death of Henry Benedict Stuart, July 2007 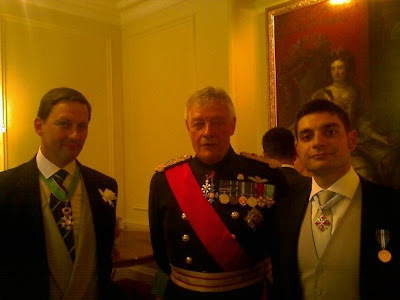 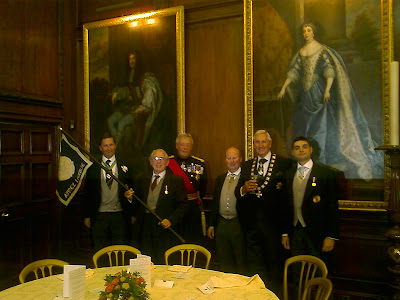 Left to Right: Philip Bonn, Viscount Maitland (Hereditary Bearer of the National Flag of Scotland, carrying the banner of the Royal Stuart Society), The Governor of the Royal Hospital (General The Lord Walker), Lord Aylmer, Lumsden of Cushnie, Rafe Heydel-Mankoo.

On Sunday members of the Royal Stuart Society and their guests gathered at the Royal Hospital Chelsea to commemorate the bicentenary of the death of Henry Benedict Stuart, the last member of the Royal House of Stuart (see earlier post "The Last Stuart", below, for an account of his life). 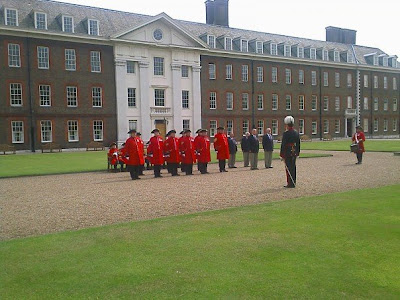 The day's events commenced at 10.40 am with a formal inspection of the Chelsea Pensioners, resplendent in their famous red tunics, by the Governor of the Royal Hospital, General The Lord Walker, GCB, CMG, CBE, equally resplendent in his uniform and plumed bicorn. David Lumsden of Cushnie, a council member of the Royal Stuart Society, accompanied the Governor during his inspection. 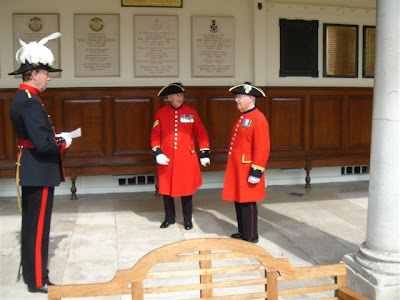 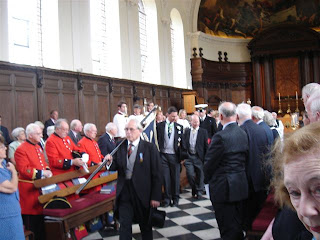 Following the inspection the Chelsea Pensioners marched into the Chapel for Matins, with the Royal Stuart Society following soon after. The banner of the Royal Stuart Society was processed into the Chapel and laid up at the altar by Viscount Maitland, the Hereditary Banner Bearer of the National Flag of Scotland (the office created for his ancestor by King Charles II). The 11 am service was conducted by the Rev. Richard Whittington MBE with a special sermon on the life of Henry (Cardinal-Bishop of Frascati, a Vice-Chancellor of the Holy Roman Church and Dean of the Sacred College of Cardinals) provided by long-standing RSS member the Rev. Canon David Skeoch (pictured). 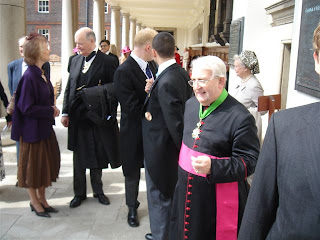 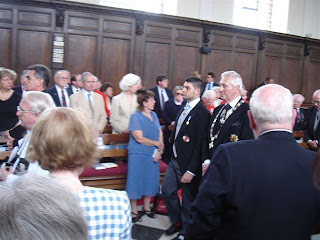 Rafe Heydel-Mankoo and David Lumsden of Cushnie process out of the Chapel. 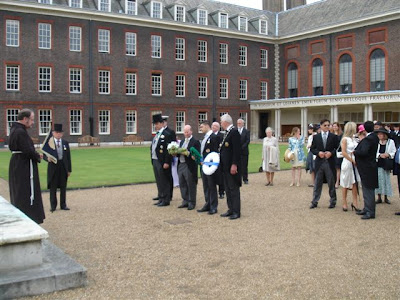 At the conclusion of the service we processed out of the Chapel and to the Figure Court and the beautiful gold statue of Charles II (the Founder of the Royal Hospital) by Grinling Gibbons. Here Father Mark-Turnham Elvins led us in prayer following which four wreaths were laid at the statute in memory of Henry. The first was laid by Lord Aylmer (Chairman of the Council of the Royal Stuart Society), the second was laid by Philip Bonn and the third was laid by David Lumsden of Cushnie. As Henry is my ancestral 2nd cousin (through his Polish mother) I laid the fourth wreath, which was inscribed "Henry - A Polish Stuart". 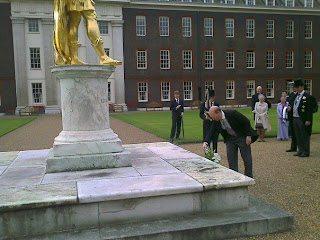 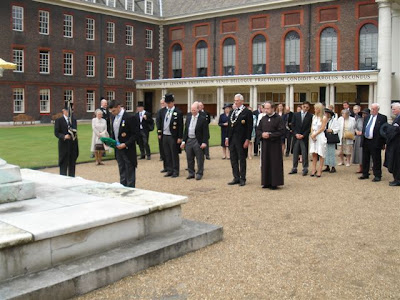 At the conclusion of the wreath-laying ceremony a champagne reception was held around the statue. The forecast had threatened heavy showers however Henry clearly desired a clear view from above as the clouds were cleared away enabling the reception to take place under bright sunshine. 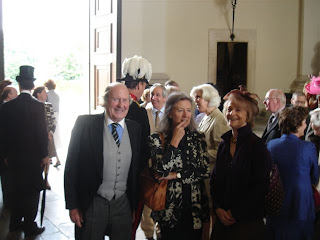 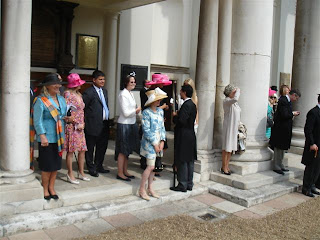 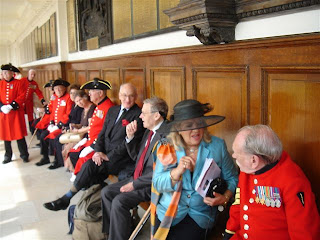 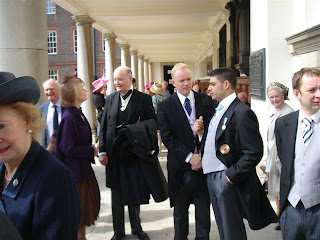 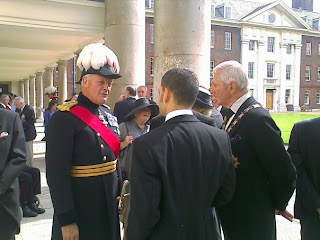 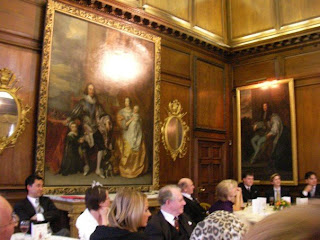 The State Apartments consist of two main rooms, the Council Chamber and an Ante-Room. The Council Chamber is a magnificent oak-panelled room designed by Sir Christopher Wren and embellished by Robert Adam and still in its original stunning condition. There are a number of fine Stuart paintings by Van Dyke, Kneeler and Lely as well as important carvings and mouldings by William Emmett, John Grover and William Cleere.

At 1:15, following pre-prandials in the Ante Room, over 60 members and guests of the Royal Stuart Society proceeded to the Council Chamber for luncheon. The "Head Table" comprised: The Governor of the Royal Hospital and Lady Walker, Lord and Lady Aylmer, Lord and Lady Maitland, TSH Prince and Princess Raoul de Rohan, Anne Meinertzhagen (nee HSH Princess de Polignac), myself, Philip Bonn and Ludovic Marolles (most of whom are pictured here): 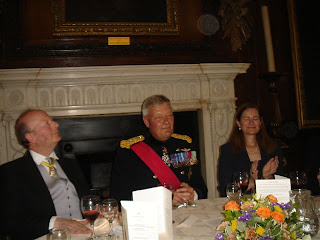 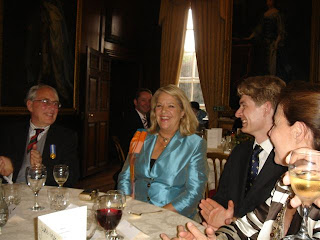 The presence of the de Rohans provided a charming link to the last Stuarts (Charles and Henry in particular) particularly, as I noted in my brief speech, as Princess de Rohan is also related to Flora Macdonald. 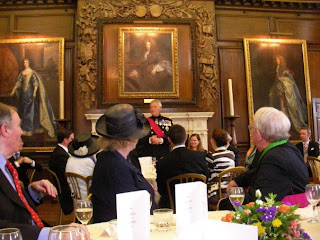 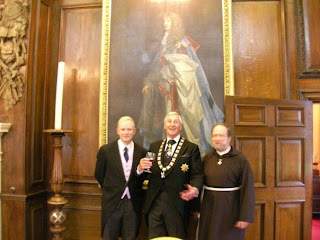 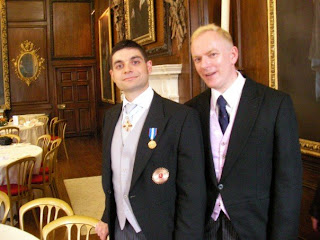 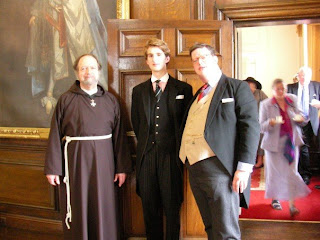 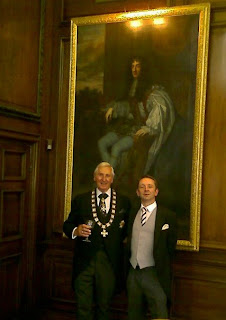 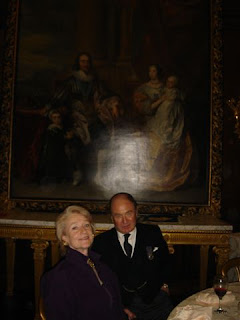 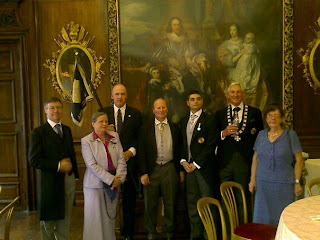 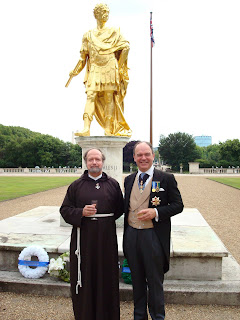 The day's events ended with coffee in the ante room at 3:30. Emerging from the State Apartments it was clear that, thankfully, the forecast torrential thundershowers had hit whilst we were dining. Leaving the Royal Hospital a group of us proceeded on to the Oxford and Cambridge Club for post-prandials and, eventually, dinner. 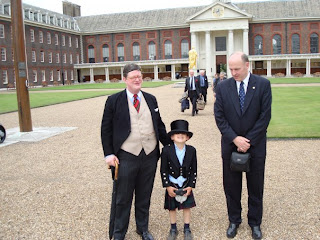 ------------------
(My thanks to Prince Raoul de Rohan, Dr. Martin Hogg and Mr. Eoghain Murphy for kindly sending me their photographs and granting me permission to use them on my blog)
Posted by heydel-mankoo.com at 09:45

Glad it went well. Unfortunately I couldn't attend (as the Society's new RC chaplain) since I had a rather full day in the parish!

I hope events like these continue in this beloved garden of the world, with all the pomp and ceremony that is due them.

As for Cardinal King Henry IX:

Glad that your celebration went so well! I didn't know that you knew Fr. Mark Elvins -- if you see him again, please wish him my best.

You've probably answered this elsewhere, but...

What is the neck ribbon and medal that you wear?

And: can you provide any explanation of the heraldic collar worn by Lumsden of Cushnie (sp?)?