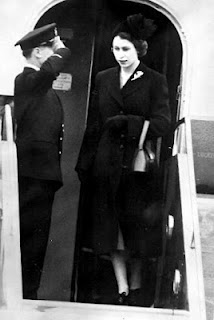 HM The Queen ascended her various thrones 60 years ago today, February 6th. The precise time of HM's accession is not known. His Late Majesty King George VI died in the morning, some time before being discovered by his valet at Sandringham at 7:15am. Once the immediate members of the Royal Family were told of HLM's death, and HM The Queen's Accession, senior members of the Royal Household travelled to 10 Downing Street to inform the Prime Minister, The Rt. Hon. Winston Churchill, MP. HM The Queen, who was in Kenya, was told of her father's death, and her Accession, by her husband. The announcement to the nation was made at 10:45am.

The Queen's Privy Council for Canada was the first to formally proclaim the new sovereign, doing so on Accession Day itself, closely followed by Her Majesty's Most Honourable Privy Council of the United Kingdom. 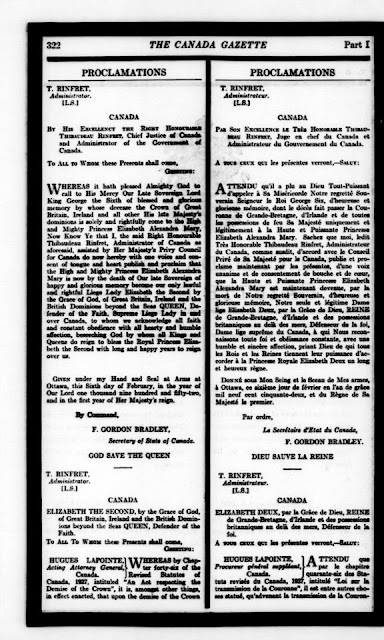 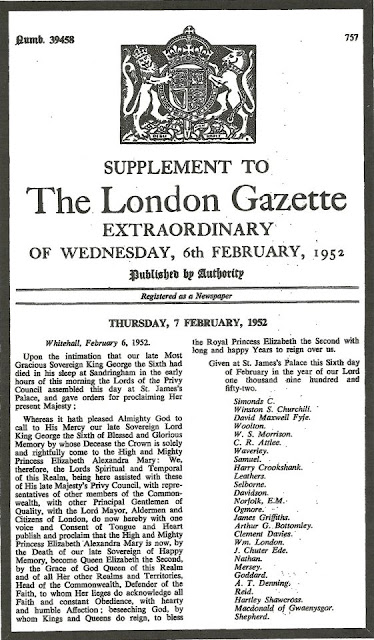 
The heralds were then escorted by cavalry escort to read the proclamations from Charing Cross, Temple Bar and the Royal Exchange (here accompanied by The Lord Mayor of London and other City dignitaries). On that same day, the proclamation was read out across the country and the world.


In Scotland, Lord Lyon King of Arms read the proclamation from Mercat Cross in Edinburgh; In Australia, HE the Governor General read it from the steps of Parliament House in Canberra at 3pm local time.
Film footage of the proclamation from the steps of the Royal Exchange, Cornhill in the City of London
Thus started Her Majesty's reign.
Posted by heydel-mankoo.com at 01:15